“As the saying goes, the pot drips what is in it.” —Rumi

“You’re just dying, Walter,” Irma his caretaker has said. “We all do.”

A poor boy who made good, now flat on his back and slack as a bean bag, Walter does not feel sorry for himself. Luck of the draw, his disease. But he does not apologize for his foul cast of mind. That has not changed nor will it likely. I was prickly way before this business, he acknowledges, and if ever I’ve earned my right to grouse… How else could I have ended up with my widget empire if not for pushing, shoving, plotting, nothing ever good enough, needled by my cantankerous, hellbent ambition?

Irma is looming over his bed, shrinking his newfound picayune place in the universe all the more.

“How goes it today, Walter?” To him she’s Gulliver as seen by the tiny people. Hungarian by birth, broad-shouldered, her big bones overwhelming any trace of tenderness, which of course is there: she’s a caretaker. She runs the household of which he has become, far as he’s concerned, a bit player, the spare tire, an afterthought, considering the beehive of activity that propels his estate. She moves about the bed fussing here and there with ballerina grace despite her girth. Walter both worships and demonizes Irma upon whom he is now totally dependent.

“I used to be in charge, Irma. This is the hardest part.”

“I know, Walter. The mighty hath fallen. But look: now you get to drink in all the beauty of your splendid home and surrounds. Forced to sit still and count your blessings. Here, take this pink pill.”

He swallows. “I’m not complaining. I’m just stating the reality, because it’s still difficult for me to believe. There’s just so much amusement staring out that window. I am goddamn sick and tired of Gomer Pyle reruns.”

“Try Andy Griffith.” She flattens her apron. On a svelte woman it could pass for a dirndl, but not on Irma. “Alright, Jackie Gleason, more sophisticated.” She pinches his exposed big toe and cracks a smile. “Seriously, there are all these books Paula has brought.”

“Another thing,” he hurls but to the side. “Would you please have the pats of butter room temperature? How can I spread them when they’re like bricks?”

Irma waltzes about, stretching wide the curtains astride the large picture window, refilling his water glass, straightening the sheets. She’s ignored the snippet about butter.

He fixes her with his gaze. He was a slight man to begin with, mostly bald, about as undistinguished as is possible for an early-ish elder. Irma rests her wide bottom at the base of the bed, to Walter more like a souped-up Laz-E-Boy rocker with all the bells and whistles, emphatically not a hospital device. Not yet. She can tell he has more to say, apart from their initial joust of the day, smooth large hands now folded in her lap.

She gently shakes her head, not to the point of whipping about the thick, blond braid that forever strikes Walter like a military guard with a rifle strapped to his back. Softly, she says: “It could be months. Years.”

“My whole life has been a schedule. Up at dawn, desk at seven-forty-five before the troops traipse in. Home at seven. Listen to the wife. Listen to the kids.”

“You mean, you sat there, stone-faced like now? In one ear and out the other.”

“It was family time.”

“Be curious of what Polly would have to say.”

“Oh, I admit. Guilty of my age, my generation. I’m the breadwinner. Bush-whacked by the time I got home. All hell breaking loose there. I’m about to add to the mayhem, the shouting match, or worse, the silence, the kids and Polly seething? Best to shut up, I always thought.” He takes a slug of water. Sick of water, too, the incessant intake of which Irma enforces, bad as an enema.

“I realize this is misery for you, Walter. An itch like you with mostly me in charge.”

“Thank God for that.”

“You’ve got ahold of God, finally?” She stands, apparently deciding enough of such an exchange.

“God? Hell, no. I haven’t gotten that far in this affair.” 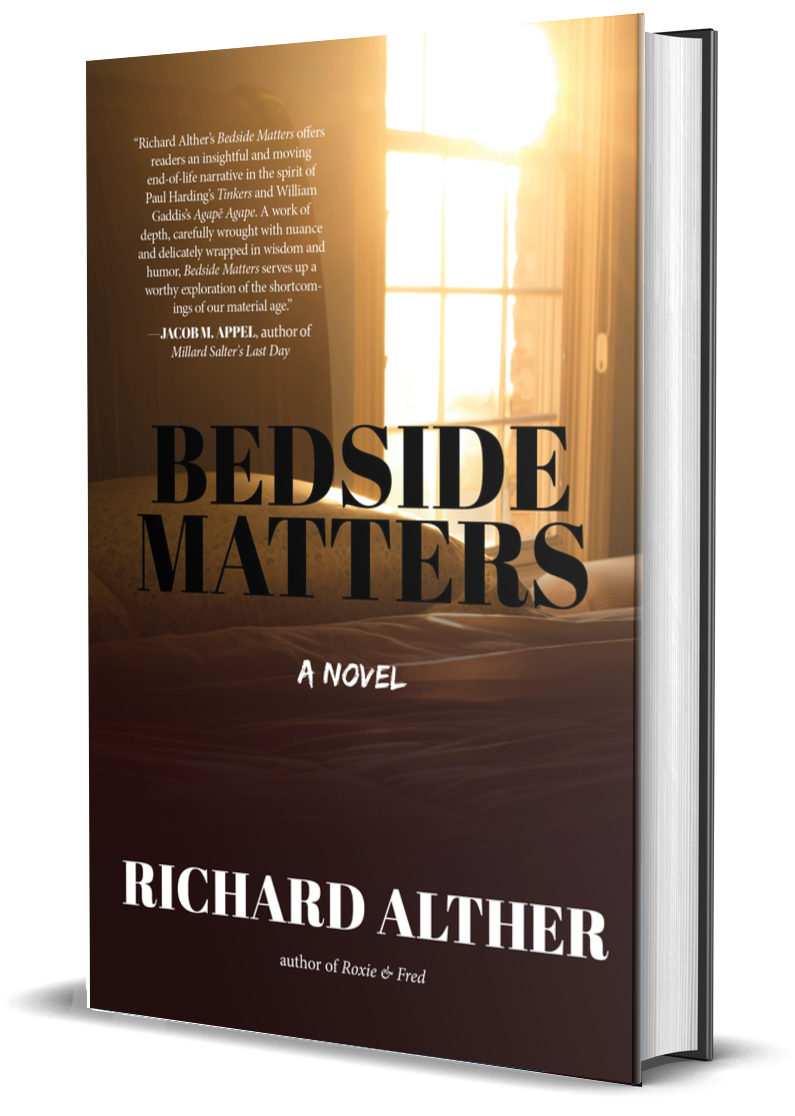